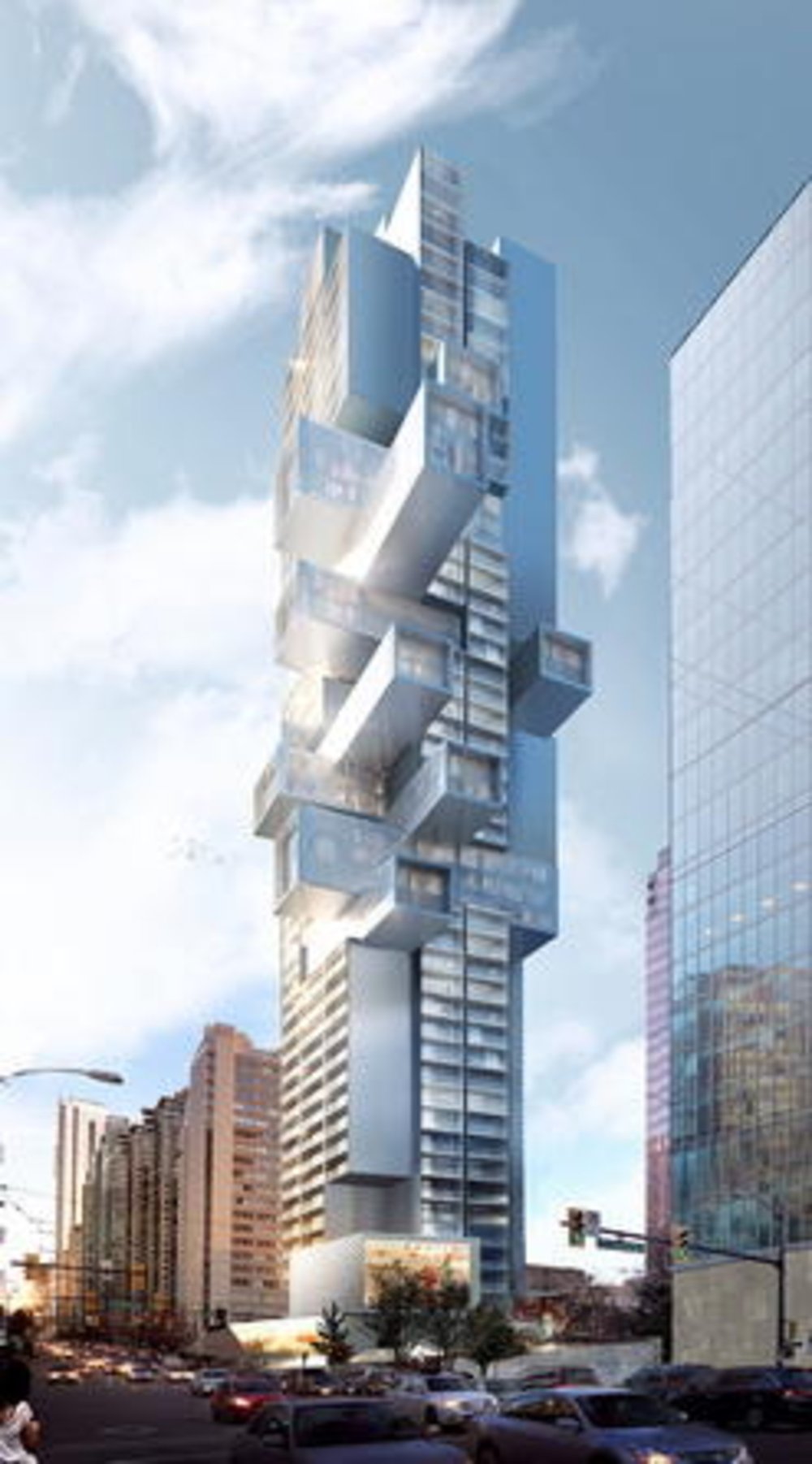 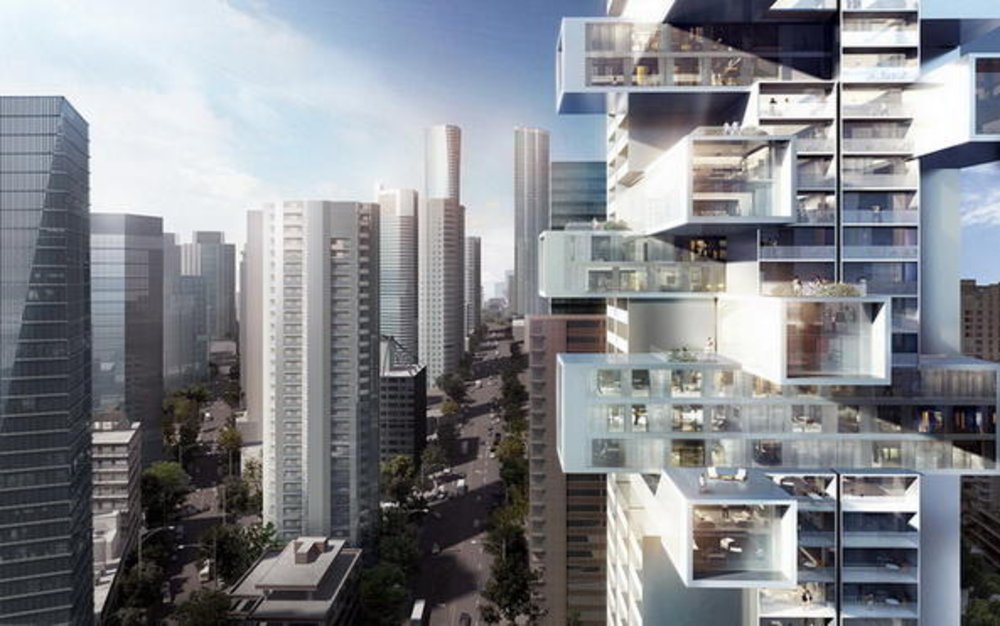 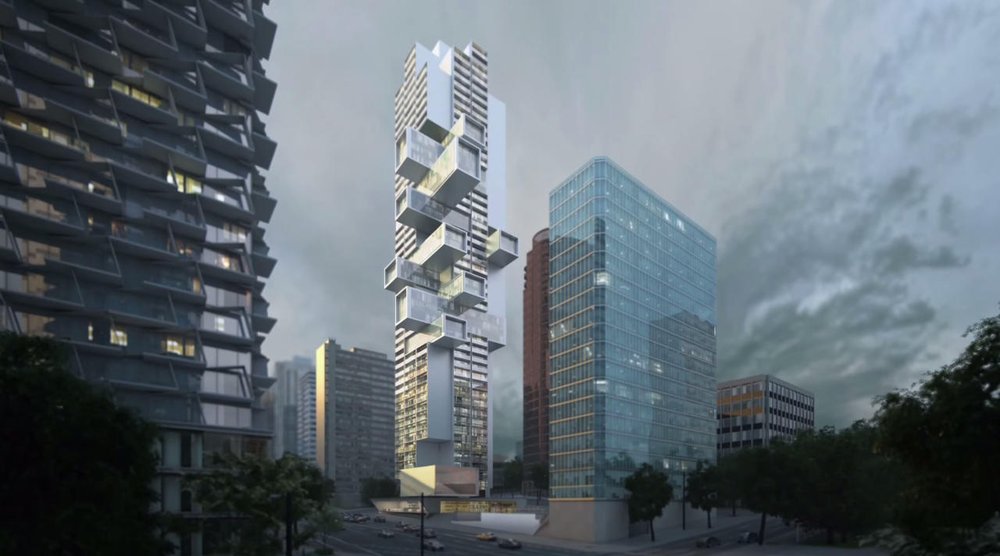 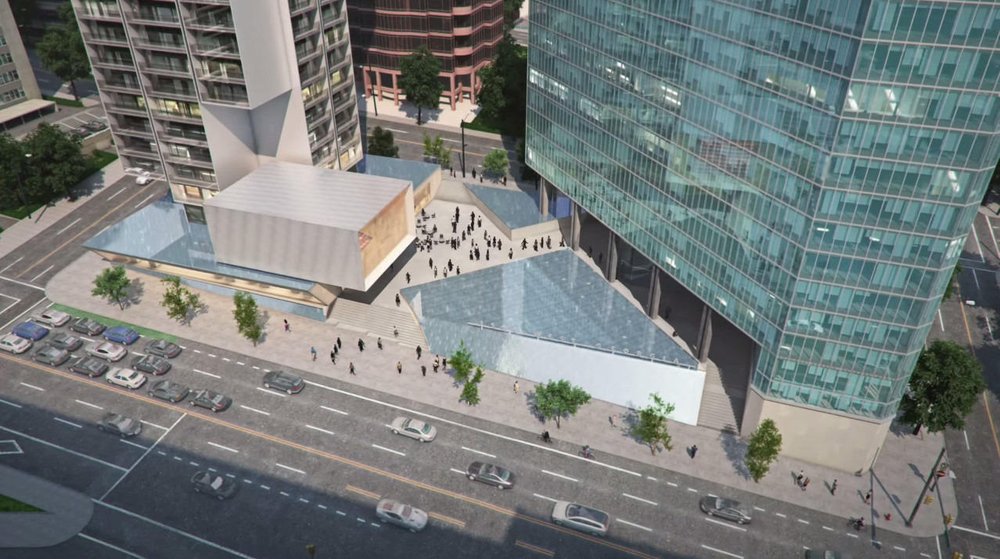 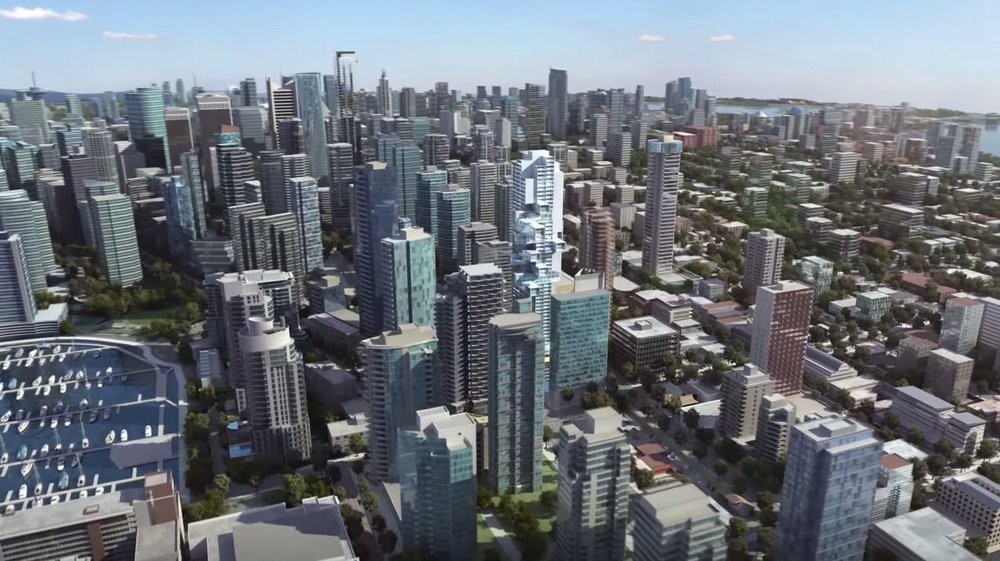 Gateway to Vancouver and Urban Pivot

Located on one of Vancouver’s main avenues, the tower stands as a new beacon at the entrance to Vancouver from the North Shore and Stanley Park and forms an urban pivot at the junction where the city’s grid splices and begins to expand from the West End to the diagonal along West Pender Street into the Coal Harbour waterfront and downtown Vancouver. Its position at the crossroads between the City to the South, Stanley Park to the North, and the waterfronts to both the East and West calls for a multidirectional design that capitalizes on the urban and natural qualities at this important site in the West End.

Engaging the Space of the City

A system of vertically shifted apartment modules enables dynamic yet rational and efficient layouts for residential units while the horizontal rotation of these modular elements projects living spaces outwards to introduce the concept of horizontal living in a slender high-rise. The resulting multiple terraces generated from these horizontal shifts create both physical and emotional connectivity between the indoor and outdoor environment.

Vancouver possesses a unique balance of urban conditions surrounded by spectacular nature that provides fertile ground for envisioning new possibilities for future living in a cosmopolitan and environmentally-friendly city. The design for this building exemplifies an ambition to reconnect architecture with the natural and civic environment and go beyond the hermetic confines of towers that increasingly inscribe our lives.

The design of the building presents a carefully crafted distinctive silhouette that reaches out to engage the space of the city and stands as a new beacon that activates the skyline. The tower opens up to embrace both city and nature in a three-dimensional sculpture, projecting the space of living outwards into the site’s surroundings, responding to the multi-directional context while respecting views to and from neighbouring buildings, and maximising unobstructed views to the surrounding water, parks, and city.

The vertical offset of the apartment modules minimizes the footprint of the tower and liberates the ground to provide an open public plaza for residents and citizens alike. An amplified reinterpretation of the existing water cascade along West Georgia builds on the strong architectural heritage of the site, while multiple crossing paths ensure urban permeability. Civic amenities are embedded around the central plaza and the extensive waterscape to engage the community and contribute to the network of downtown green and public space.

Special consideration has been given to maintaining existing spatial qualities while enhancing and reinvigorating aspects of the public plaza and its heritage. As a special place in the city for Vancouverites who have fond memories of the existing office building and water cascade by architects Rhone and Iredale, the design retains the modernist Crown Life Place and enhances the qualities of the site and respectfully translates the original character, while offering new possibilities to the community. The minimised footprint of the residential tower touches the ground and embeds itself into a multi-level water landscape.

Sustainability strategies for passive and active energy savings are integrated with the architecture to target significant reductions in energy consumption and aspire to achieve LEED Platinum.

Renewable energy sources at the top of the building’s sculpted crown generate 100% of the energy for the public amenities at the ground, creating a new model that visualizes sustainability and gives carbon-free space back to the public.